Written by Adaptive Lab founders James Haycock and Shane Richmond Bye Bye Banks covers.  Haycock and RIchmond spoke to a number of senior banking executives in developing their three D theory as to how retail banks are being displaced, diminished and disintermediated. It starts with this great quote from Bill Gates:

I thought it was short, very interesting book that everyone who works in, or near financial services should read.  In fact I’ve bought two more copies of it to send on to work colleagues and friends! 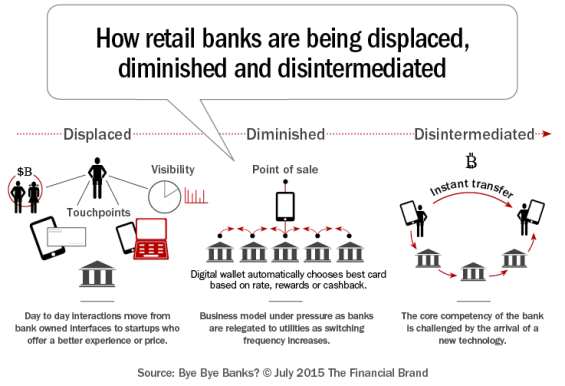 The table that shocked me the most can be seen below.  The startups listed in the table are SIGNIFICANT disruptors and for there to be such little awareness of them amongst Senior executives is highly concerning.

Some of my favourite quotes that sum up the disruption retail and investment banks are facing were:

If you are nearing retirement why would you put the last years of your career on the line by doing something risky?

Indeed.  This quote sums up the problem facing so many industries.  Leadership are not incentivised to do anything more than maintain the status quo.

At the moment, banks are set up to be very risk-averse, partly because of all the issues with the regulators.  So whereas digital, by definition, is about taking risks and seeing whether things work.  In banking, the kind of iterative process that is common at startups is actually quite difficult.  In a bank, if you came in and said something like, ‘I have a 20% probability of working’ you get kicked out of the office.  Whereas in the digital space if people think they have a 20% chance of working, they give it a go. Then if it doesn’t work, they try and work out why it doesn’t work and then try and improve it.